​How many Zuubly reviews do you need to see?

You wouldn't be here if it didn't.

This Zuubly-powered rental site gets all sorts of leads for people in the Scottsdale area who are having computer issues. 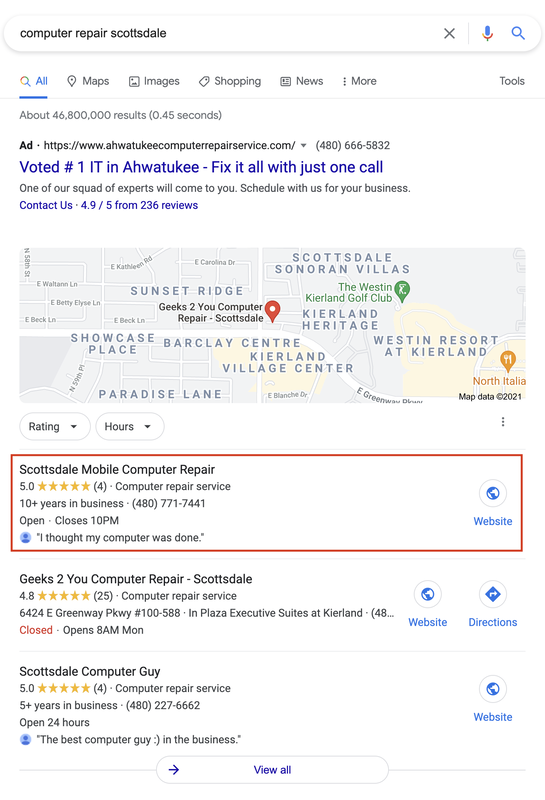 ​Sometimes we dominate the Maps Pack.

Sometimes we dominate the organic listings (below it).

Sometimes we're fortunate enough to do both.

But as long the website is generating emails and calls, it's valuable.

This particular asset can make our computer repair partner thousands of dollars a month in extra income.

So we can feel good about charging them a small fraction of that in "rent," can't we?

But let's talk about you.

And you build your first rental site in the same niche: mobile computer repair.

But since there are thousands of other cities you could do this in, why compete with us?

Maybe you do yours in Rochester, Minnesota.

That's the beauty of this.

There are millions of niche + city combinations to pick from.

So everyone inside Zuubly is willing to share what's working and even help one another rank.

Do you think someone who's doing Amazon FBA is going to share their winning product that's making them twenty grand a month in the Facebook group?

Because everyone else will go copy them verbatim and eat away at that twenty grand until there's nothing left.

Not the case here.

We never have to step on one another's toes.

Trust me, we wouldn't be sharing this with you if we were worried about extra competition.

We would need an army and several lifetimes to even put a dent in all the potential that's out there.

​But don't just take our word for it.

We're happy to prove it.

Something no other course creator or coach (that we've seen, anyway) is willing (or able!) to do.

Maybe that's because their method no longer works.

Maybe it never did.

Or maybe they make all their money from selling you the system, and they haven't actually done it, themselves, in years.

Or maybe, as we said earlier, it's too cutthroat to share wins publicly.

Either way, why invest in a program that can't show you one live example that's actually making money?

If you can't see it with your own two eyes, why would you think it's gonna work for you?

Whereas, we can show you endless examples.

Because A) we walk the walk, B) this works as advertised, and C) it's so far from saturated, it's not even funny.

Here, let me show you another one:

There's plenty more where that came from.

No competitor or troll or cynic or skeptic can say anything to change our reality.

We've been doing it for six-plus years.

We still do it today, and make the majority of our money from doing it (not from coaching).

It works today, post-pandemic, just as good as it ever has.

If you follow the steps and put in the up front work, it will work for you too.

Notice, we are not claiming you will get rich doing this.

Nor are we saying you just click your mouse three times and checks start coming in.

It takes time and effort and grit, but boy, is it worth it.

These "digital assets" can pay you, month in and month out, for years and years to come.

Thank you for reading this Zuubly review.

​I know your time is valuable.